“Friends do not let friends work on a coding project without version control.” You might have heard this before, without really considering what this means. Or maybe you are convinced about this saying, but have not had the opportunity to use git, GitHub or GitLab for versioning your applications. If so, now is the time to update your workflow!

Have you ever experienced a piece of code disappearing? Or the unsolvable problem of integrating changes when several people have been working on the same piece of code? Or the inability to find back something you have written a while back?

If so, you might have been missing Version Control (also shortened as VC). In this chapter, we’ll be focusing on git, but you should be aware that other VC system exist. As they are less popular than git, we will not cover them here. Git was designed to handle collaboration on code projects49 where potentially a lot of people have to interact and make changes to the codebase. Git might feel a little bit daunting at first, and even seasoned developers still misuse it, or do not understand it completely, but getting at ease with the basics will significantly improve the way you build software, so do not give up: the benefits from learning it really outweigh the (apparent) complexity.

There are many advantages to VC, including:

These are the four main actions you will be performing in git: if you just need to learn the minimum to get started, they are the four essential ones.

When using add, you are choosing which elements of your project you want to track, be it new files or modifications of an already versioned file. This action does not save the file in the git repository, but flags the changes to be added to the next commit.

A commit is a snapshot of a codebase at a given moment in time. Each commit is associated with two things: a sha1, which is a unique reference in the history of the project, allowing you to identify this precise state when you need to get back in time, and a message, which is a piece of text that describes the commit50 . Note that messages are mandatory, you can not commit without them, and that the sha1 are automatically generated by git. Do not overlook these messages: they might seem like a constraint at first but they are a life saver when you need to understand the history of a project.

There is no strict rule about what and when to commit. Keep in mind that commits are what allow you to go back in time, so a commit is a complete state of your codebase to which it would make sense to go back to. A good practice is to state in the commit message which choices you made and why (but not how you implemented these changes), so that other developers (and you in the future) will be able to understand changes. Commits messages are also where you might specify the breaking changes, so that other developers can immediately see these when they are merging your code.

Once you have a set of commits ready, you are ready to push it to the server. In other words, you will permanently record these commits (hence the series of changes) to the server.

Once changes have been recorded in the main server, everybody synchronized with the project can pull the commits to their local project.

Branches are git way to organize work and ideas, notably when several people are collaborating on the same project (which might be the case when building large web applications with R).

How does it work? When your start a project, you are in the main branch, which is called the “main”. In a perfect world, you never work directly on this branch: it should always contain a working, deployable version of the application.

Other branches are to be thought as work areas, where developers fix bugs or add features. The modifications made in these development branches will then be transferred (directly or indirectly) to the main branch. 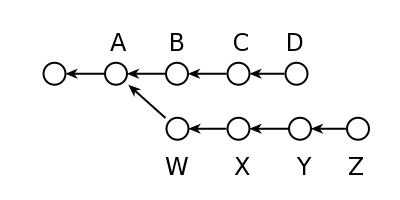 In practice, you might want to use a workflow where each branch is designed to fix a small issue or implement a feature, so that it is easier to separate each small part of the work. Even when working alone.

If you are working with a remote tool with a graphical interface like GitLab, GitHub or Bitbucket, there is a good chance you will be using issues. Issues are “notes” or “tickets” that can be used to track a bug or to suggest a feature. This tool is crucial when it comes to project management: they are the perfect spot for organizing and discussing ideas, but also to have an overview of what has been done, what is currently done and what is left to be done. Issue may also be used as a discussion medium with beta testers, clients or sponsors.

One other valuable feature of issues is that they can be referenced inside commits using a hashtag and its number: #123. . In other words, when you send code to the centralized server, you can link this code to one or more issues and corresponding commits appear in the issue discussions.

Git is very well integrated to the RStudio IDE, and using git can be as simple as clicking on a button from time to time. If you are using RStudio, you will find a pull/push button, a stage & commit interface, a tool for visualizing differences in files. Everything you need to get started is there.

Note that of course, it will be better on the long run to get a more complete understanding of how git works, so that when things get more complexe, you will be able to handle them.

Git is not reserved for team work: even if you are working alone on a project, using git is definitely worth the effort. Using git, and particularly issues, helps you organize your train of thoughts, especially upfront when you need to plan what you will be doing.

And of course, remember that git is not reserved to {shiny} Applications: it can be used for any other R related projects, and at the end of the day for any code related projects, making it a valuable skill to have in your toolbox, whatever language you will be working with in 10 years!

There are a lot of different ways and methodologies to organize your Git workflow. One of the most popular ones is called git flow, and we will give you here a quick introduction on how you can manage your work using this approach. Please note that this is a quick introduction, not a complete guide: we will link to some further reading just at the end of this section.

So, here are the key concept of git flow:

Here is a summary of this process: 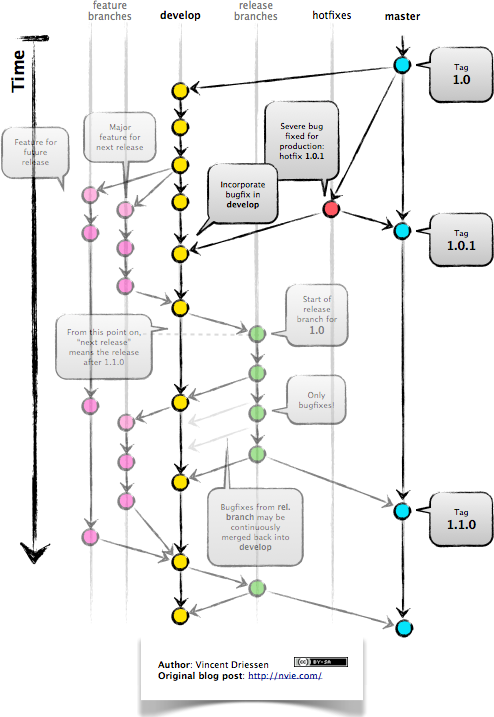 From a software engineer point of view, here is how daily work goes:

Of course, there are way more subtleties to this flow of work, but this gives you a good starting point. Generally speaking, a good communication between developers is essential for a successful collaborative development project.

If you want to learn more about git, here are some resources that have helped us in the past:

We have seen in chapter 11 how to build a testing infrastructure for your app, notably using the {testthat} (Wickham 2020) package. What we have described is a way to build it locally, before running your test on your own machine. But there is a big flaw to this approach: you have to remember to run the tests, be it regularly or before making a pull request/pushing to the server. To do this kind of job, you will be looking for a tool to do automated testing at the repository level: in other words, a software that can test your application whenever a piece of code is pushed/moved on the repository.

To do this, various tools are available, each with there own features. Here is a non exhaustive list of the one you can choose:

travis-ci is a software that can be synced with your git repositories (GitHub or Bitbucket), and whenever something happens on the repo, the events described in the travis configuration file (.travis.yml) are executed. If they exit with a code 0, the test passes. If they do not, the integrated tests have failed. Travis CI integration may be used internally and externally: internally, in the sense that before merging any pull request, the project manager have access to a series of tests that are automatically launched. Externally, as a “health check” before installing a software: if you visit a GitHub repository that has Travis badges included, you can check if the current state of the package/software is stable, i.e. if it passes the automated tests.

Travis CI can do a lot more than just testing your app: it can be used to build documentation, deploy to production, or to run any other scripts you want to be run before/after the tests have passed. And the nice thing is that you can test for various versions of R, so that you are sure that you are supporting current, future and previous versions of R.

All of this is defined in the .travis.yml file, which is to be put at the root of your source directory, a file that is automatically generated when calling usethis::use_travis().

Note that Travis CI can run tests on GNU/Linux or MacOS operating systems.

Finally, use_github_action_pr_commands(), sets checks to be performed when a Pull Request is made to the repository.

If you are working with GitLab, you can use the integrated GitLab CI service: it serves the same purpose, with the little difference that it is completely docker-based: you define a yaml with a series of stages that are performed (concurrently or sequentially), and they are all launched inside a docker container. To help you with this, the colinfay/r-ci-tidyverse docker image comes with pre-installed packages for testing: {remotes} (Hester et al. 2020), {testthat} (Wickham 2020), {config} (Allaire 2018)… and is available for several R versions. This docker image can be used as the source image for your GitLab CI yaml file.

Here is an example of one of these files

Automated testing, continuous integration and continuous deployment is a vast topic that can not be covered in a few pages inside this book, but spending some time learning about this methodologies is definitely worth the time spent: the more you can automate these processes, and the more you test, the more your application will be resilient, easy to maintain and easy to enhance: the more you check, the quicker you will discover bugs.

And the quicker you detect bugs, the easier it is to correct them!